History of the Akhal-teke "…Then followed ten of the sacred horses,
known as Nisaean, in magnificent harness…
They come from the great Nisaean plain in Media,
where horses of unusual size are bred…"
(Herodotus, The Histories)

This unique breed is not less than three thousand years old. The Akhal-Teke is a direct descendant of the horses of the Massagetae, the Bactrians and the Alans which were famous in antiquity. In ancient Persia these horses were known as Nisaean and several centuries later - as Parthian, but they were always spoken of as the best in the world. In the second century B.C. the Roman historian Oppian wrote of them: "These horses, worthy of the most powerful rulers, are strikingly beautiful in appearance, they move lightly under the rider and lightly accept the bit; the head with its Roman nose is carried high and their golden manes flow majestically in the wind." After studying most of the relevant historical, archeological and literary data, modern specialists (V. Firsov, K. Gorelov, V. Witt, V. Kovalevskaya, E. Ershova, M. Belonogov and others) came to the conclusion that the Akhal-Teke breed is a strain of the ancient racehorse that has developed independently. For many centuries no other breed could compare with it in respect of size, strength, speed and distinctive beauty.

The antiquity of the breed is beyond dispute, but no specialist, either now or in the past has been able to explain the appearance of such a horse on the territory of modern Central Asia. Its unusual appearance is unlike that of any of the ancient types of equines. Consequently the theory that this remarkable breed originated outside the area merits consideration and in the light of recent archeological findings in the Altai a number of specialists support this view.

There is clear evidence in modern literature on the subject that these horses were instrumental in the creation of such world famous breeds as the Arabian and the English Thoroughbred and in the improvement of breeds of horses in Russia, Europe and the Near and Middle East. In the words of Professor Witt, the Akhal-Teke horse "possesses the last drop of that valuable blood from which all the breeds of well-bred horses have been developed." 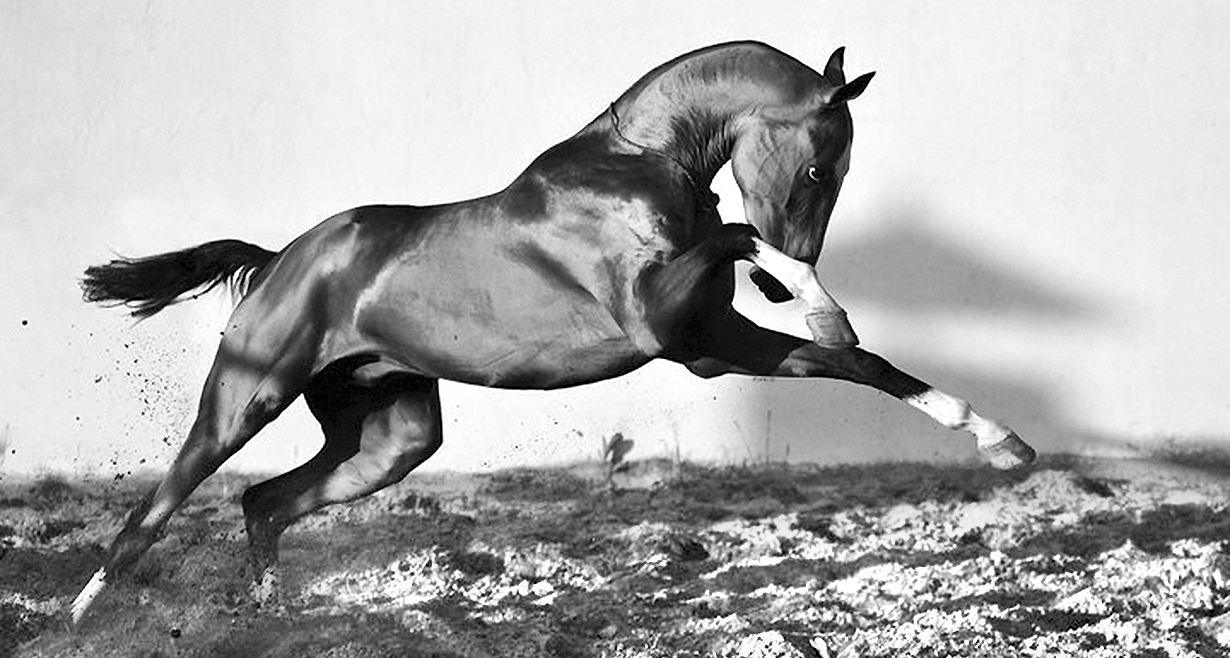 In the Middle Ages the horses of the Central Asian civilisations of antiquity passed into the hands of the Turkmens who kept pure the blood of these priceless animals as their qualities surpassed those of all other breeds. After the annexation of Turkmenia to the Russian Empire in l88l the Turkmen horse became known as the Akhal-Teke combining the name of the Teke Turkmen tribe and the Akhal oasis in the foothills of the Kopet-Dag mountains. At that time the horses there were kept singly, as part of the household, surrounded by love and affection and fed light but highly nutritious food such as alfalfa, barley and pellets containing mutton fat. Because the owner depended on his horse for his wellbeing and his very life, no expense was spared in its care and maintenance. As an old Turkmen saying goes: "The owner who rears a good horse turns into a lean dog." But the horse repaid his owner with an exceptional devotion. Mistrustful of strangers, he gave his heart to his one and only friend.

The Akhal-Teke is indeed endowed with legendary qualities. As a participant in the battle of Geok-Tepe testified: "An Akhal-Teke stallion wearing two heavy blankets and wounded by a sabre blow carried away three Teke tribesmen across the quicksand from pursuing Cossacks.."

These horses, renowned for their exceptional speed, strength and beauty, had long since been known as argamaks in Russia where they were highly valued. To possess an argamak was the dream of every prince and the argamak was the most sought-after improver at stud. They were instrumental in the development of the Don and the Orlov riding horse. In the first half of the eighteenth century argamaks constituted a third of the stock at state studs. After the annexation of Turkmenia to Russia many connoisseurs and horse lovers had the opportunity of familiarising themselves with the breed and became its passionate admirers. Valuing the unique qualities of the Teke horse and concerned to preserve the breed which at that time was in decline for historical and economic reasons, the governor of the region, General Kuropatkin, organised at his own expense, the Transcaspian state stables and invited Russian specialists to work there. This marked the beginning of the breeding of Thoroughbred stock in the Transcaspian region and revived interest in the Akhal-Teke throughout the world. Horses from the Transcaspian stables which were shown at exhibitions in Kiev, Pyatigorsk and Paris caused a sensation,and vast sums of money were offered for Teke mares.

Turkmen horses had long since been bred in Russia, but in the twentieth century they started breeding Akhal-Tekes in the Northern Caucasus, Stavropol and Kalmykia and today they have penetrated as far afield as the Leningrad and Kaliningrad provinces. Russia occupies second place in the world in respect of the number of Thoroughbred Akhal-Tekes on its territory - and indeed, "Russians have always loved these horses excessively".