The Akhal-Teke
Born to challenge the wind of the desert!

“We will never relax our attention to our race horses, as they are our pride and glory and source of our inspiration. Born on the Turkmen land, Ahalteke horse is a symbol of a striking harmony, beauty, gracefulness and incomparable swiftness given to it by nature and developed by the labor and mind of a man.”

Divine horses, equine aristocrats, fabled steeds, effulgent diamonds - such flowery epithets have been lavished upon that unique equine breed - the Akhal-Teke. Prized by Alexander the Great, Darius the Great, Genghis Khan, Roman emperors, Marco Polo, and many others, the Akhal-Tekes have served people for approximately over 5,000 years. Absolutely everything about this horse is unique, outlandish and stunning. It is the most ancient breed on earth. It is one of the most beautiful, elegant and proud horses in the world. Its endurance and resistance to heat are second to none.

Turkmenistan’s national emblem featuring the Akhal-Teke. The Akhal-Tekes come from the Kara-Kum Desert of Turkmenistan. It is a place for the toughest people and equines. The Turkmens would never have survived without the Akhal-Teke, and vice versa. Turkmens were the first desert people to produce a horse ideal for the environment.

The Akhal-Teke takes its name from a Turmen tribe "Teke" that lives at the Akhal oasis. It is one of the most distinctive horses in the world. Nearly everything about it is exotic and outlandish.

Body. Its body is tube-like; the breast is narrow; the back is long; the rib-cage is shallow; the loin is long and unpronounced. The quarters are narrow, and would be a nightmare in another horse, but they are spare and sinewy; the croup is quite long, muscular and with a normal sloping angle. The withers are high, long and well muscled. The shoulders are long, with good slope and very clean shoulder bed. The coat is exceptionally fine and shiny, the skin is thin - in character with a horse of desert origins. A feature of the breed is a short, silky tail.

Head and neck. The head is fine and elegant, in harmony with the body, with wide cheeks. The nose line is straight or slightly dish-like, and the big eyes give an impression of boldness. The nostrils are wide, thin and dry, and there is width between the long, beautifully shaped alert ears. The head joins the long, lean neck at an angle of 45 degrees. The neck is set very high and almost vertically to the body. The forelock and mane are not very long.The line from the mouth is often higher than the withers, a feature peculiar to the breed.

Legs and feet. The legs are long, clean and dense with clearly defined sinews. The forelegs are usually set close together and are straight; the forearm is long. The hindlegs are long, the hocks are carried high off the ground. The feet are small but regular, the heels are set low, the hoofs are small and hard. Fetlocks have little to no hair.

Movements. The Akhal-Teke’s movements are unique, like the horse itself. The way he carries his body, turns his head, shifts his sensitive ears, rears, etc., is absolutely fascinating.The Akhal-Tekes are products of the sand desert, and the style of their pace is ideal for sands. It is specifically “soft and elastic.”  Their pasterns are upright, he walks in a smooth manner, sort of sliding over the ground in a flowing movement without swinging the body, which is better balanced. The push is “elastic” but powerful. The trot is also free-sliding, and the gallop is easy and long. The jumping action of the Akhal-Tekes is cat-like.

Temperament and attitude towards humans. The Akhal-Teke horses are vigorous, excitable, and restless. Thousands of years of selective breeding have left their mark not only on their physical appearance and efficiency, but also on their behavior. These horses are not only sensible but also very sensitive; they are even able to respond to mental suggestions of humans. Their intelligence is not comparable to any other breed. They are essentially "one-master" horses. Some Tekes may be difficult when ridden by strangers. With them you cannot achieve obedience by shouting or punishment. A glance, a small gesture, or a soft-spoken word are sufficient. A punishment not understood by the horse can cause them to be in a defensive mood for weeks. They are horses with character, outspoken individuals. As Sue Waldock, President of the Akhal-Teke Association of GB says: “They respond best to daily love and attention, a bit like a dog. If you ignore a dog it will misbehave too. Bonding with a human owner is in their blood.”
They are not suited to nervous or irritable humans. They not only need a sensitive rider, but a human being who can share their feelings when they gallop over vast areas just for the joy of movement. They are not suited to the limitations of modern stables, which kill their spirit. They are horses belonging to wide open spaces.

Colors. Akhal-tekes come with variety of colors, which include chestnut, bay, gray, palomino (isabella), raven black, dun and many others.

History.  Akhal-Teke horse is universally considered one of the most ancient ones. Many researchers regard it as the most ancient one. Of ancient noblesse, older than that of the Arabian or the English Thoroughbred, the Akhal-Teke is a full-blooded horse that is second to none. Most interesting archaeological evidence was unearthed in famous Pazyryk ancient man-made stony hill in Altai (Southern Siberia). The hill was a burial place of a Scythian chieftain. A permafrost layer at the foot of the hill had almost perfectly conserved equine remains, dated at the 6th century B.C. The horses discovered were very close to the modern Akhal-Teke breed.Skeletons of horses more than 2,500 years old, discovered during archaeological digs at Anau, near Ashgabad, also point to their link with modern-day Akhal-Tekes. Around 1,000 B.C. the Indo-German Bactrian tribe raised horses on the north slopes of Afghanistan that were very similar to the Akhal-Teke horses of today.

Since ancient times the “heavenly horses” were a political issue. The Persian emperor Cyrus married a daughter of King of Medes Astyages to gain access to the Bactrian horses, which he was unable to secure by force. Alexander the Great, through his marriage to Roxane, the daughter of a Bactrian king, acquired the fastest and most gallant horses of his time. It is to them he owed much of his successes on the battlefield. The Chinese, under Emperor Wu, in 103 B.C., even started a war to acquire those horses.Probe, an emperor of Rome, is known to have been presented with an Akhal-Teke horse that could cover the distance of 150 kilometers a day for up to ten days in a row.The Akhal-Tekes have been valued in Baghdad Caliphate (9-10th centuries A.D.). The Caliphate’s elite army consisted of mounted Turkmen who rode Turkmenian thoroughbreds.Alexander the Great, Darius the Great — the Persian ruler and king of kings; Genghis Khan, and his rival Dzhelaletdin, a Seljuk Turkmenian national who forced Genghis Khan to give up an idea of a crusade to India, the lords of Parpha, Mongolia and Turkey, are all known to have used the “Godly, heavenly horses” in their military campaigns.Most emotional records are extant of medieval European visitors of Turkmenistan. Marco Polo paid tribute to the Turkmenian horse. He wrote that Turkmenistan was producing excellent large horses that were selling at 200 libras each. Marco Polo traced the ancestry of Akhal-Tekes to Bucephalos, the legendary stallion of Alexander the Great. Alexander’s affection for that horse has a material evidence. At the death of his stallion, Alexander interrupted his campaign to erect a memorial tomb in his honor, which is still in existence in Pakistan.The discovery of a Sea Passage from Europe to India considerably reduced the importance of the continental “Silk Road.” The Silk Road crossed Turkmenistan and contributed a lot to interaction of Asiatic peoples. The peoples settled down along this way, Turkmen included, became “forgotten”. Since the 17th century the role of the Akhal-Teke horse was mistakenly assigned to the Arabian breed.

When breeders increased the number of Akhal-Tekes, they began to be used extensively in classical equestrian sports. Moreover, statistics show that in relative terms the Akhal-Tekes have been the most successful breed in Russian equestrian sports.
A household name with all lovers of the breed is the black Absent, the seven-times national champion, the Olympic champion of Rome in 1960, the Bronze medalist of Tokyo in 1964. International journalists dubbed the stallion the Horse of the World.

Another Akhal-Teke outstanding dressage horse was Abakan, who with Elena Petushkova won the National Championship in 1979 and the USSR Winter Championship. Akhal-Tekes excel in jumping as well. They jump like cats. Absent’s sire Arab jumped 2.12 meters; Poligon jumped 2.25 meters — the record for Akhal-Tekes. A remarkable feat was performed by the Akhal-Teke stallion Perepel in 1950 in Ashgabad, when he did a broad jump of 8.78 meters. The official record acknowledged by FEI stands at 8.26 meters.

The Akhal-Teke has a huge potential in classical sports that is yet to be more developed. 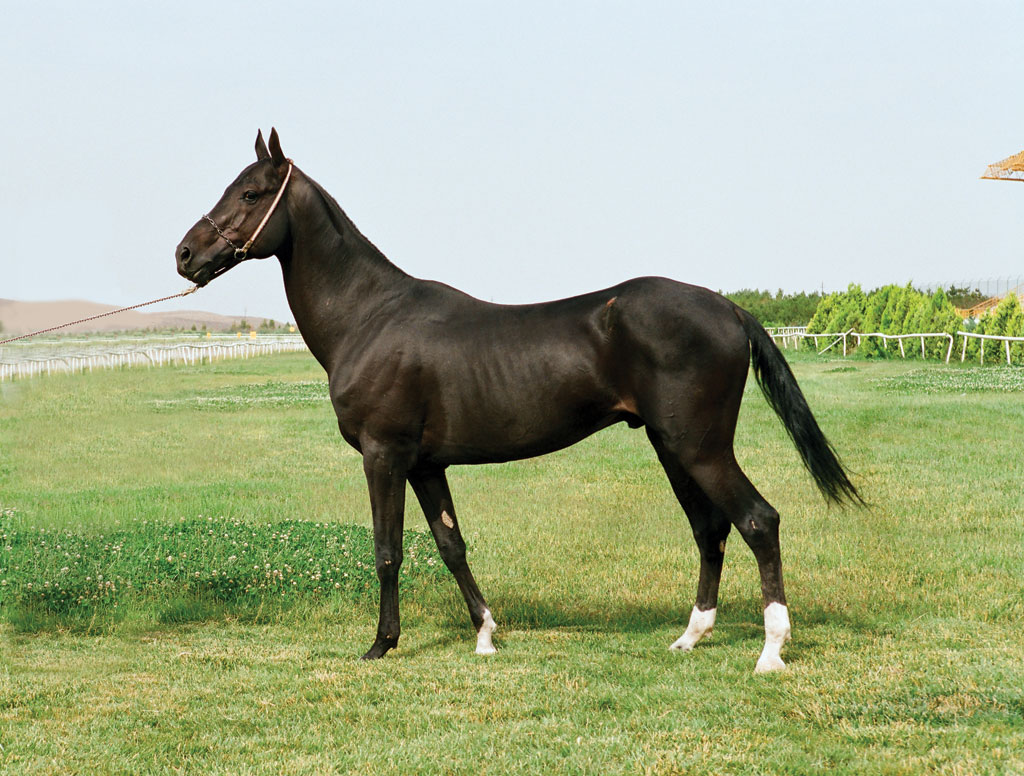