Akhal-Teke is an Ancient and Exotic Horse Breed Several individuals of an ancient, rare horse breed call northern Larimer county birthplace and home. It’s not by chance that members of their kind are here, but by design.

Local horsewoman Jas Shearer-McMahon was introduced to the Akhal-Teke (pronounced AH-kuhl TEH-kee) in the mid-1980s. German scientist and Teke enthusiast Eberhard Sprandel had selected Colorado for its arid climate and rugged terrain, similar to his beloved breed’s native desert region of Turkmenistan. Sprandel, now deceased, immigrated and imported more than 20 Tekes, becoming only the second U.S. breeder at the time. Shearer-McMahon became enamored of his horses and crossed a non-Teke mare with one of the stallions.

Historical records date the exotic breed’s ancestors to circa 2400 BC central Asia’s Akhal Oasis. The nomadic Teke Turkmen tribe, who frequented the same region, eventually domesticated the horses. Akhal-Tekes were the tribesmen’s preferred war horses from 500 to 1500 AD. They decorated their prized steeds with semi-precious stones and silver, draped them when at rest with colorful, woven textiles, and fed the horses cakes made of grain and mutton fat. 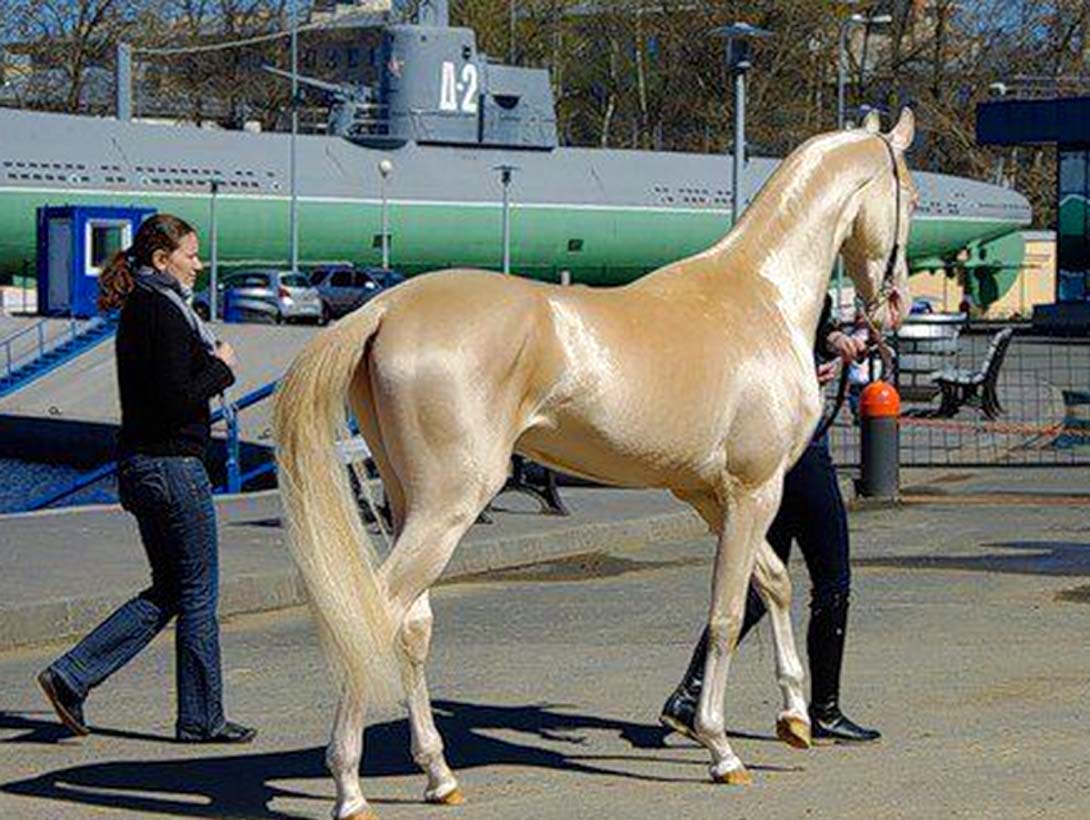 Purebred Tekes number a mere 3,500 worldwide, approximately 500 of which are in the United States. More can be found in Canada, all around Europe, and in Russia. Shearer-McMahon said that Iran maintains some of the purest bloodlines.

Her own Magic Valley Ranch lays in a high desert area of Larimer county at 6,000 feet, a marvelous environment in which to raise purebred Akhal-Tekes. She’s been doing so since 1990, with two mares currently in foal for 2013. “One to keep and one to sell!” Shearer-McMahon clarified.

Her longtime breeding program took a hard hit when her stallions’ frozen semen was destroyed in the devastating July 2011 fire at Colorado State University’s Equine Reproductive Lab. Although many other people suffered similar misfortune, it was particularly tragic for Shearer-McMahon because, after collection and freezing of his semen, her premier stallion, MV Patrickhan (aka “Patrick”), had been gelded for showing purposes.

However, Shearer-McMahon remains optimistic. “I look forward to putting my breeding program back on track after my losses,” she declared.

Akhal-Tekes are also often out-crossed onto other breeds, including Arabians, Morgans, Quarter Horses, Thoroughbreds and ponies. The Nez Perce Indian tribe began crossing the breed they developed, the Appaloosa, with Tekes in the 1990s to re-create the spotted horse’s original appearance and traits. These had been all but lost when the Cavalry killed or confiscated most of the tribe’s spotted herds. The desired re-creation, called The Nez Perce Horse, is a combination of Appaloosa mares and Teke studs, many of which were donated by breeders to the program. The hope was also to generate pride and horsemanship skills among tribal youth.

Shearer-McMahon rides her horses in combined training events, polo, dressage and endurance. The pair competed in the 2010 Happy Jack 50-Mile Endurance Ride in Laramie. Eleven-year-old Patrick, has received regional and national endurance recognition, including Mountain Region Endurance Riders and American Endurance Ride Conference year-end point awards in 2009, 2010 and 2011. Also, he won the International Akhal-Teke Cup for most endurance miles in 2009. Another coup for the horse and rider was completing the 2011 Tevis Cup 100-mile ride in the required 24 hours. The Mountain Mettle 100-Mile Ride on June 23 in the Denver area was just recently on Shearer-McMahon’s and Patrick’s 2012 calendar (results TBA).

Said 60-year-old Shearer-McMahon, “I’ve been riding endurance since 1979 and was never breed-specific until I found the Akhal-Teke, the most comfortable horse you’ll ever ride.”

She also pointed out that, although considered a hot-blooded breed, the Teke is a sensitive, smart and sensible one.

Akhal-Teke breeders can be found across the U.S. and Canada. Shearer-McMahon said that prices range from approximately $8,000 to $50,000. Magic Valley weanlings begin at $6,000. Part-Tekes can be had for less.

Shearer-McMahon voices great respect and admiration for the only breed she now owns, rides, propagates and promotes. She recommended, “If you’re looking for an ancient breed ready for the future, consider the Akhal-Teke.”