A Day at the Races in Horse-Mad Turkmenistan The venue is impressive. Completed in 2011 at a cost of $100m to showcase the country’s venerated breed, the Akhal-Teke, spectators must walk through an entrance adorned with a large portrait of strongman president Gurbanguly Berdymukhamedov astride a horse.

The eccentric leader’s love for the animals has been widely trumpeted by state media. In April, the leader awarded himself the honorific title of “People’s Horse Breeder”, and he’s also the author of a popular tribute to the breed, Akhal-Teke: Our Pride and Glory. 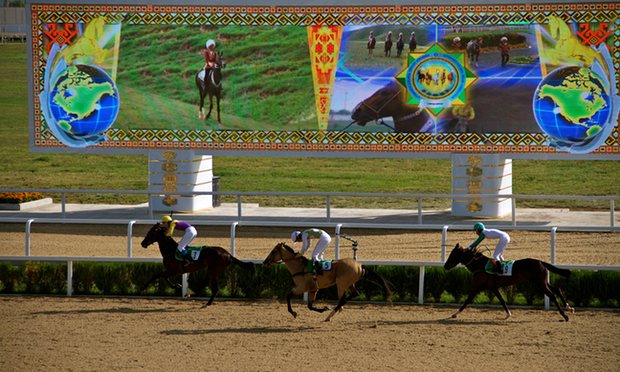 Riders warm up their horses at the $100m Ashgabat hippodrome during Sunday afternoon races. 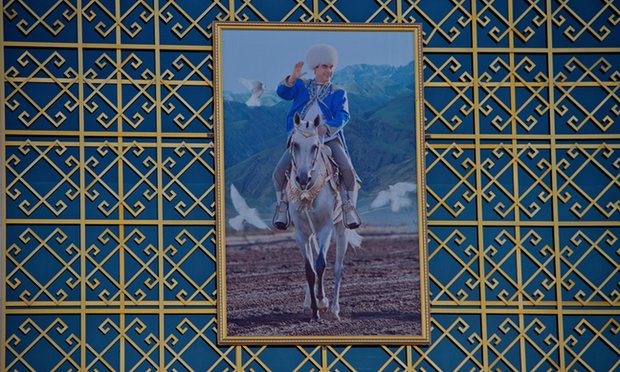 A portrait of president Gurbanguly Berdymukhamedov astride an Akhal-Teke horse welcomes spectators at the main hippodrome entrance.

Each Sunday afternoon the grandstand fills up fast. Horse-racing is an important family event in the country – an opportunity for people of all ages and backgrounds to come together, a rare luxury in a country where few mass gatherings are permitted, unless they are being held in celebration of the state and its leaders.

The country is frequently ranked among the worst offenders in the world for abusing human rights, and although the freedom of peaceful assembly and association is enshrined in the constitution, the authoritarian government severely restricts the movement of its citizens.

But at the races, none of this is evident. Students wearing identical tracksuits dominate the front rows. The back seats are occupied by older viewers, nervously exchanging information about the jockeys. Girls in red dresses and twin braids, a hairstyle typically worn by unmarried young women, are also out in force.

Leaflets containing information about the riders circulate widely among the spectators and although gambling is prohibited, none of the young men in the stands make any secret of their betting, and the police officers standing watch pay little heed to the experienced betters calling out numbers, sums and names. 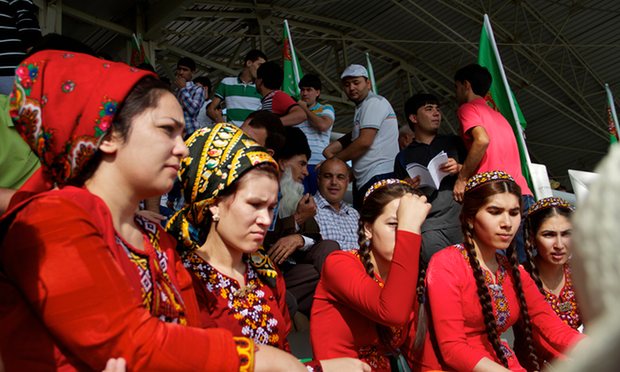 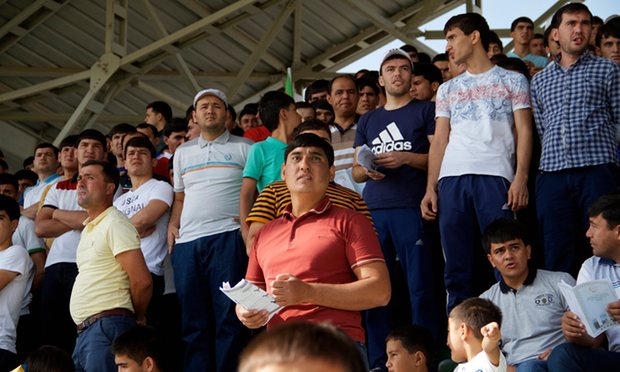 In hopes of having made the right bet, punters watch the jockeys and horses race around the course.

The Akhal-Teke is believed to be one of the oldest domesticated breeds of horse, whose name derives from the Akhal oasis – a former Turkmen fortress – and the Teke, one of the country’s five major tribes. For thousands of years the animals have been prized for their beauty, speed and stamina. Alexander the Great’s favourite horse – Bucephalus – was said to have been an Akhal-Teke.

When the horses move off from the track’s start line a hush descends over the crowd.Some observers start cheering passionately, egging on their favourites, while other gaze on in rapt attention.

Their muscular bodies topped by jockeys in bright, colourful jerseys are a majestic sight as they move over the 1,000m course. Once they cross the finish line, the tension eases, the winners collect their money, and the cycle of betting begins all over again.

Leaflets provide information about each of the jockeys and their horses.

In traditional Turkmen culture the Akhal-Teke are mentioned in countless songs and proverbs, and are thought to symbolise the country’s national spirit. When a horse dies it receives a formal funeral, and mistreating them is considered a sin.

Though the breed was driven to the verge of extinction amid Soviet-era collectivisation and a communist ban on private horse ownership, the horses are now enjoying a resurgence. Former president Saparmurat Niyazov – as the head of what was then the Turkmen Soviet Socialist Republic – permitted the resumption of private breeding in the 1980s, and there are thought to be some 6,000 Akhal-Tekes in the world today.

As the country gained its independence in 1991, the horse was raised to the status of a national symbol and was incorporated into the state coat of arms. In 2013, Berdymukhamedov said: “Our country is moving forward with the speed of an Akhal-Teke stallion and I call on you all to move forward and only forward.”

A version of this article first appeared on Eurasianet.org